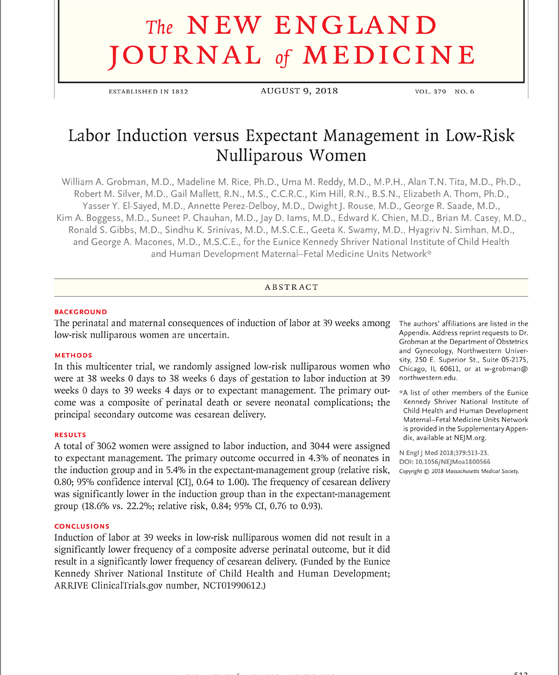 The long-awaited ARRIVE Trial was published in the August 9, 2018 edition of the New England Journal of Medicine. The American College of Obstetricians and Gynecologists (ACOG) issued a joint press release with the Society for Maternal-Fetal Medicine (SMFM) on August 8, 2018 stating that, based on the results of the ARRIVE Trial, it is reasonable to offer induction at 39 weeks to women with low-risk pregnancies who are sure of their due dates.

For the low-risk woman, routine induction at 39 weeks will turn a potential low-intervention birth with freedom to move, change positions, and choose a wide variety of comfort measures to a high-intervention birth with the laboring woman most likely in bed hooked up to IV Fluids, Pitocin, continuous electronic fetal heart rate monitoring, and probably epidural analgesia. Both the mother and baby will not get the benefit of hormones that surge in the last few days before the spontaneous onset of labor to provide protection for the fetal brain and to prepare the lungs for air breathing (Buckley, 2014). The increased costs for the necessary technology and medications required with induction as well as increased need for nursing support must be considered. In addition, there are serious concerns about the study itself:

For me, the results of this study do not meet this standard set by the authors of A Guide to Effective Care in Pregnancy and Childbirth (Enkin, et al, 2000):

“Any interference with the natural process of pregnancy and childbirth should also be shown to do more good than harm.”

ACOG took an important step forward to promote normal physiologic birth with their 2017 committee opinion on limiting interventions for women with low-risk pregnancies. I believe they have taken a giant step backwards in stating that it is reasonable to offer low-risk women labor induction at 39 weeks.

You can use this chart to let students in your childbirth classes know how their experience of labor will be different if they choose induction at 39 weeks.