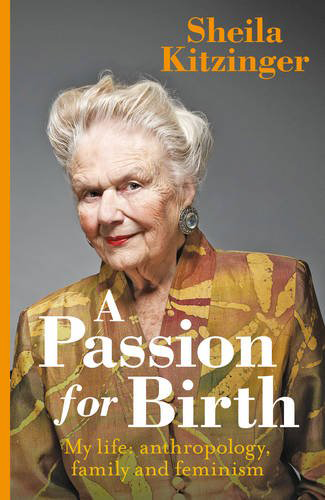 What an incredible treat to read A Passion for Birth, Sheila Kitzinger’s autobiography. It brought back so many memories of reading and devouring her books and of hearing her speak as a young childbirth educator in the 80s. Although she didn’t like being called a “guru,” she was, in fact, the most influential childbirth educator in the world. She studied birth in different cultures around the world, challenged medicalized birth in the UK (often with her own research!), and campaigned for midwives and women’s rights regarding birth in many countries. Her last book, A Passion for Birth, invites you to learn about Sheila the young girl, the student, the actress, the activist, the spokesperson, the wife, and the mother. Through her book, I traveled to mud huts in Jamaica where mothers lived in abject poverty, yet birthed and raised their children with generosity and dignity. In her home in the UK, I could picture Sheila sitting inside a playpen to write, while her five young daughters played around her. I learned that she and her husband, Uwe, organized humanitarian aid to the city of Dubrovnik when it was under siege for 7 months in 1991 after Croatia declared its independence. I admired her leadership in raising awareness around the world about the imprisonment of Dr. Agnes Gereb in Hungary for attending women at home births. The book ends with a few of Sheila’s treasured vegetarian recipes and the obituary she wrote for herself. But I think this quote best captures Sheila’s spirit:

For me the power of birth is like the strength of water cascading down
the hillside, the power of seas and tides, and of mountains moving. There
is no way of ignoring it. You cannot fight it. Techniques cannot enable a
woman to control it as she might be in control of a car or a computer.
I believe that whoever is helping should aim not to manage, conduct, or
coach, but to give her strength and confidence as she allows her body to
open and her baby to press through it to life. Midwives can help use this
powerful sexual energy to keep birth normal.